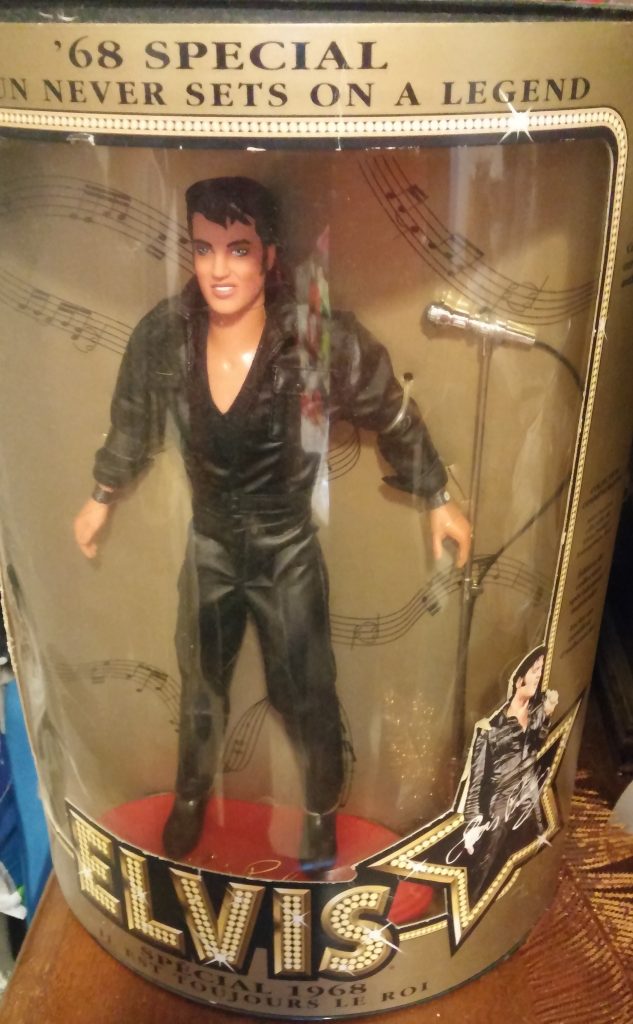 After I grabbed Elvis,  I took J to her room, and improvised the “story” of this particular doll.

Back in the day, after I moved out of our old home, my mom also moved into a new place on her own. Being alone for the first time in her life, she was scared. That first night, she couldn’t sleep, because she was afraid of monsters and creepy things in her bedroom, just like J was. So, the next morning, she went to a special store and bought this Elvis doll. It had secret powers that protected you at night from bad things while you slept. I reminded J of how when we used to go visit grandma, she still had this by her bed. I wasn’t sure how it worked; maybe he came alive at night and fought off the monsters, who knows.  All I know is that we never saw anything scary at grandma’s place. After my mom passed away, I took Elvis and kept him tucked away, in case his powers were ever needed again.

I placed Mr. Presley high in J’s closet, and told her that if she ever felt scared that night, then all she had to do was look at Elvis, and remember that her, and grandma, would keep her safe.

Aight, aight. Perhaps I exaggerated the details a wee bit.  I’m a liar, I already admitted that. Truth be told, I never asked my mom what the deal was with Elvis. He was her favourite singer, and this doll was randomly displayed prominently in her bedroom. I’m sure the real story behind it wasn’t so crazy…..but what if it was?