No doubt, one of the cool things about being a parent is exposing your children to those things that you enjoy. You devout a lot of attention to their interests and activities, so it’s fun to hang out with them every once in a while doing something that you like. Me? I like sports. Basketball, football and baseball mainly. I’ve been pretty excited since my kids’ births to be able to take them to some games with me.

Last year, an opportunity came up to go the last game at Ivor Wynne Stadium. The Hamilton Ticats (of the CFL) played there, and were moving into a brand new stadium that they were having built. Figured that it would be dope experience for B.

One day, I’m sure that he’ll thank for me for taking him…..not that day, though. .Here are the Sportscentre highlights:

Pre-Game: While holding his hand walking to our seats, his little hand started pulling mine to his face, and then to his nose. So I could pick his nose for him. Gross. I pull our hands down, we keep walking for a bit. Out of nowhere, some lady yells at us “His pants!” I look down, his pants are around his ankles. How long they were like that, no clue.

First Quarter: B is sort of into the game for about two minutes, then wants popcorn, and only wants popcorn. I give in, get us some. He tells me that he’s going to eat it all, and spends the rest of quarter hogging it.

Second Quarter: B wants to go home by now. However, he does ask me at one point why the game is stopped. I tell him there’s a timeout. In B’s world, a timeout means that you’ve done something bad, and you need to sit on the stairs or something. B is really interested as to the reason why the ‘football man’ got a timeout, and what he did to get it. I try to explain the different meaning to him, but he doesn’t get it. Even that night, hours later before bed, he asked me why the football man was bad. I gave up, just told him he gave another man an ‘ow boo boo’.

Third/Fourth Quarter: Treats and a noisemaker work for a bit, but B really wants to go home. Eventually he gives up asking. Then he decides in the pouring rain, freezing cold, and among like 20 something thousand screaming people, to curl up and go to sleep. Stays asleep until we leave.

Post-game: While walking out, he sees an ambulance. Starts freaking out excitedly at the ambulance. Later, when asked what his favorite part of the game was, he replied ‘the ambulance!’

We also thought that it be fun for him if we took the “Ticat Express” bus to and from the game. On the bus ride home, at every stop, he asked me why we had stopped, and I would give him the same answer (a red light). Finally, I get tired of him asking:

B – ‘Are cows are crossing the road?’

Guess I shouldn’t have asked.

Anyway at least the ambulance was memorable for him. He’ll thank me for that one day. 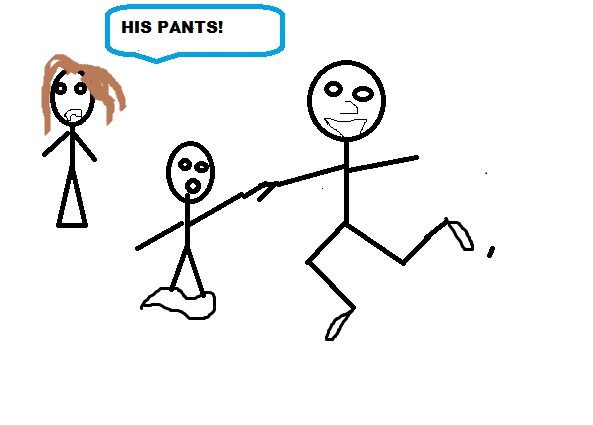