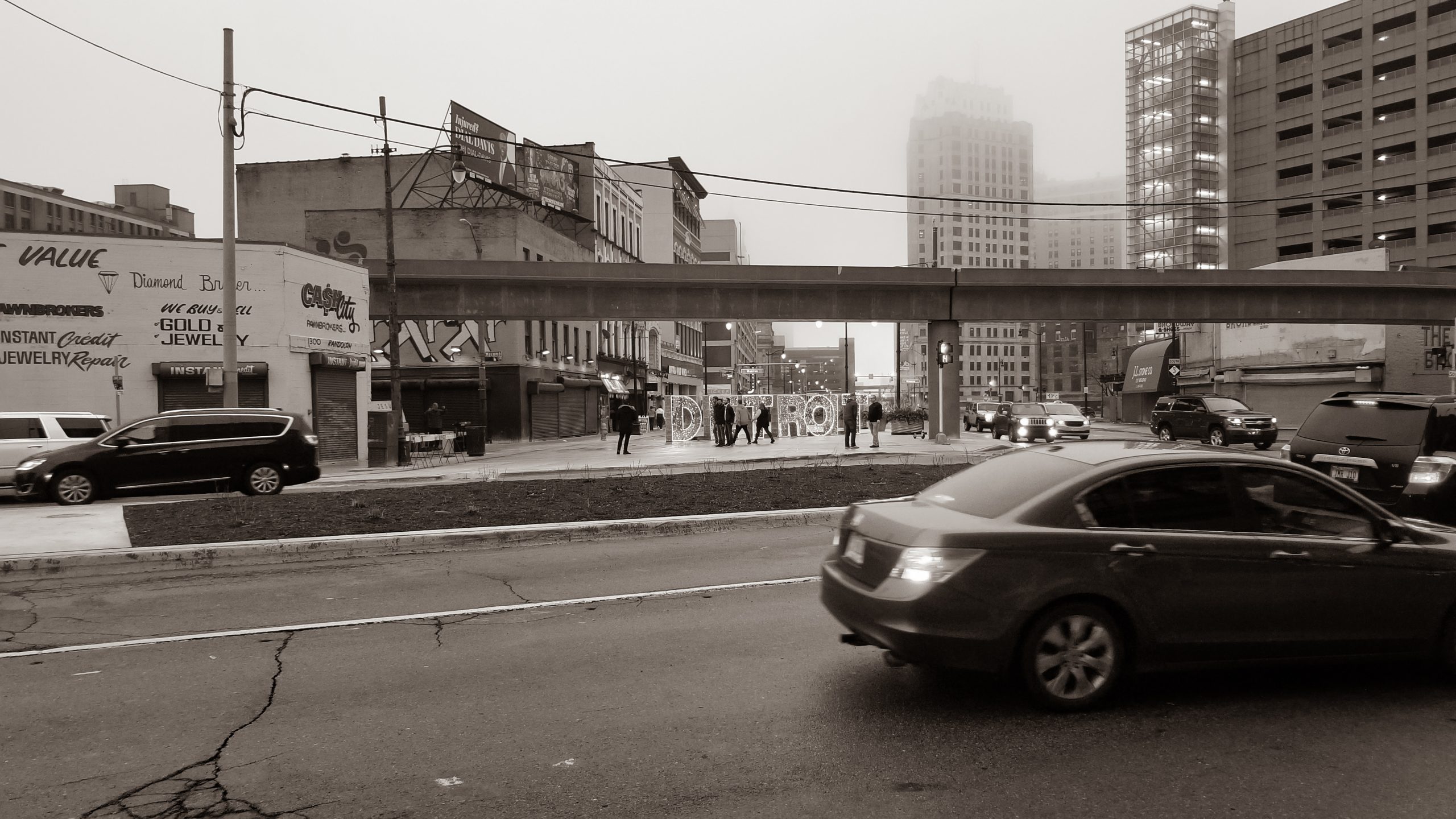 Even though Detroit has a rich music history,  there’s a case to be made that the city’s theme song should be “Bad Reputation” by Joan Jett. Indeed, to outsiders like me, Detroit has a perception for being dangerous, unsafe and having a struggling economy. So, with that in mind, I figured a perfect road trip for my family would be to spend 24 hours in Detroit!

Reading that out loud makes it sound like a terrible idea. Anyway, there are actually  plenty of things to do in Detroit with kids, that are safe and fun. During our brief time there, we scratched the surface of Motown’s sights and sounds like a DJ playing a vinyl record on a turntable.  While that probably doesn’t make me qualified to give you and your family a guide of things to do if you’re spending 24 hours in Detroit, it’s too late now. To quote Marvin Gaye, let’s get it on!

WHAT BECOMES OF THE BROKENHEARTED LIONS FAN?

Detroit is a serious sports town, with professional teams  represented across all four of the North American Big Four leagues. For the family of sports fans, you could base a short road trip to Detroit around attending a Tigers, Lions, Pistons or Red Wings game. This is actually what we did, as we were fortunate enough to check out an NFL game for free, courtesy of my friends at the Detroit Lions! 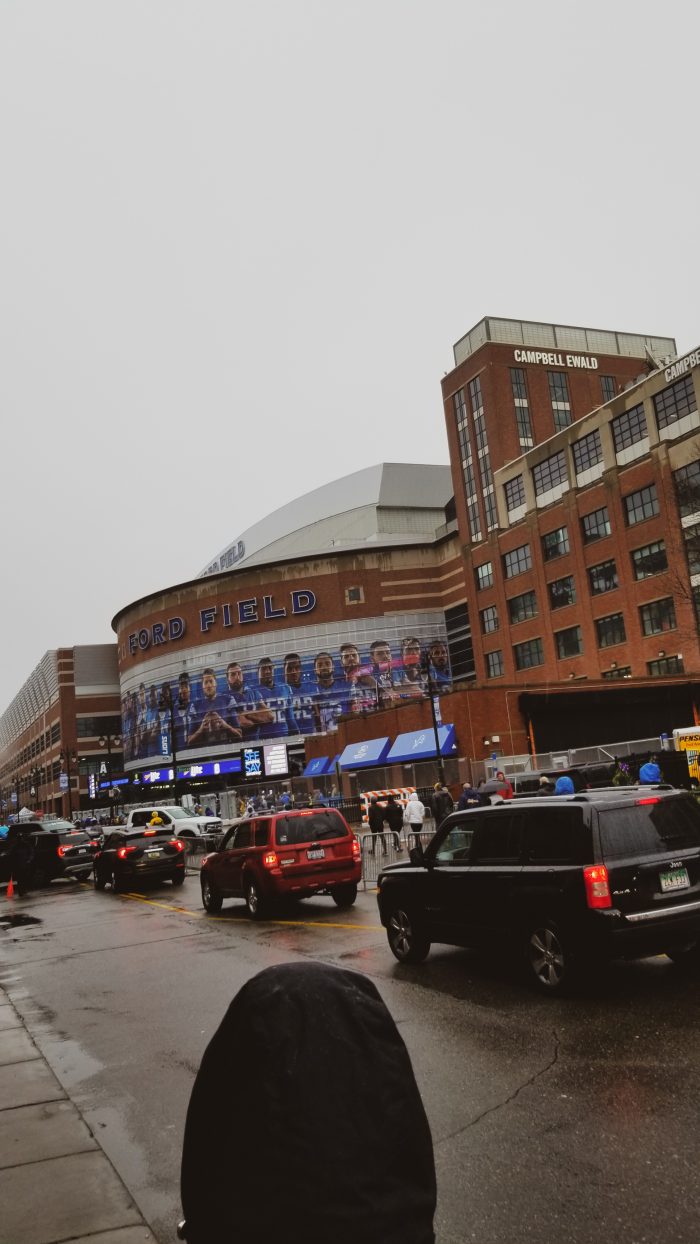 Now, almost every sporting event that we have been to over the last 10 years has been with a kid who was still in diapers, thus requiring us to bring a diaper bag. To our chagrin, the NFL ain’t about that. They have a  strict clear bag policy  and diaper bags are prohibited. Attempts to find an approved bag beforehand, last minute, were futile, so we Macgyvered a solution:

I tried to get clever with it, once we got inside the stadium. I stopped by a merchandise stand, and asked if they could give me a plastic bag. They, not surprisingly, said no, unless I bought something. I promptly purchased an official Detroit Lions clear bag, which I will probably never use again, but made for a nice souvenir.

Of the five people in my family, only B and I would consider ourselves true football fans. As such, the off-field stuff would need to be as on point as the on-field product, to entertain my clan.  While we didn’t partake in any tailgating, we did arrive at Ford Field early, to check out the pre-game festivities. To the Lions’ credit, they did a pretty good job of getting even neutral bystanders like us to buy into the #onepride spirit.  Games were set up, with chances to win Lions swag.  A drumline roamed the stadium, playing some hyped-up jams. A live band rocked out near one of the gates, which had people dancing in the streets.

Ford Field doesn’t wow you with anything, but everything about the stadium is OK, if that makes sense.  As we wandered around Ford Field, I noticed that the concourses were very wide and spacious. I didn’t worry much about losing my kids in a crowd, as they were always within site.  Guest services was helpful in this regard too, as they provided us wristbands which K and I wrote our contact information and the kids’ names on, for them to wear. Food and drink options were plentiful. The washrooms weren’t disgusting. Our complimentary seats were in the 100 level. Great sight lines, and comfortable enough. 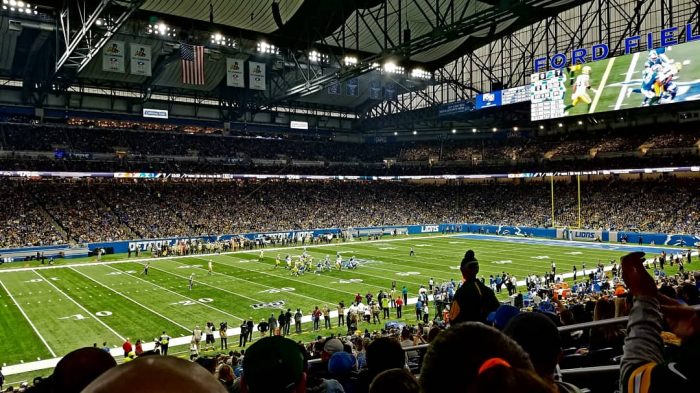 I’ve been to  football games before where drunk and belligerent fools made the experience less than family-friendly. Luckily, this wasn’t the case at our Lions game. The crowd was very lively and rawkus, but I didn’t see anyone being too out of control. Well, besides little KJ, I mean. He developed cranky toddleritis, so we had to leave before the game ended. This was for the good, as the Lions ended up losing in last-second, heartbreaking fashion. Beyond that, it was a solid afternoon of pigskin action, and I wouldn’t find checking out a Lions game again, in the future!

knocks me off my feet (to sleep)

Now, a good chunk of our 24 hours in Detroit was obviously dedicated to the Lions game. However, we still needed a place to rest our heads.  If sports are the purpose of your trip, like ours, Ford Field, Comerica Park (where the Detroit Tigers play) and Little Caesars Arena (home of the Detroit Red Wings and Detroit Pistons) are located downtown.  As such,  it makes sense to try to stay downtown.

When looking into hotels, I found ones located in downtown Detroit to be a bit on the pricier side.  For the most part, parking was an extra cost, too. The rates were not insignificant at that ($30 and up), especially if in and out privileges weren’t included. If you just plan on taking public transportation/taxis/Ubers around, this isn’t a big deal, of course. For us,  it was potentially a costly issue.

We ended up staying at a Holiday Inn Express in Allen Park, Michigan, which is a 15 minute drive in the southwest direction from downtown Detroit.  The room was about half the price of similarly rated rooms near Ford Field, plus free parking.  This seemed to be typical of most hotels located outside of downtown, either in surrounding neighbourhoods or bordering cities. Speaking of that…. 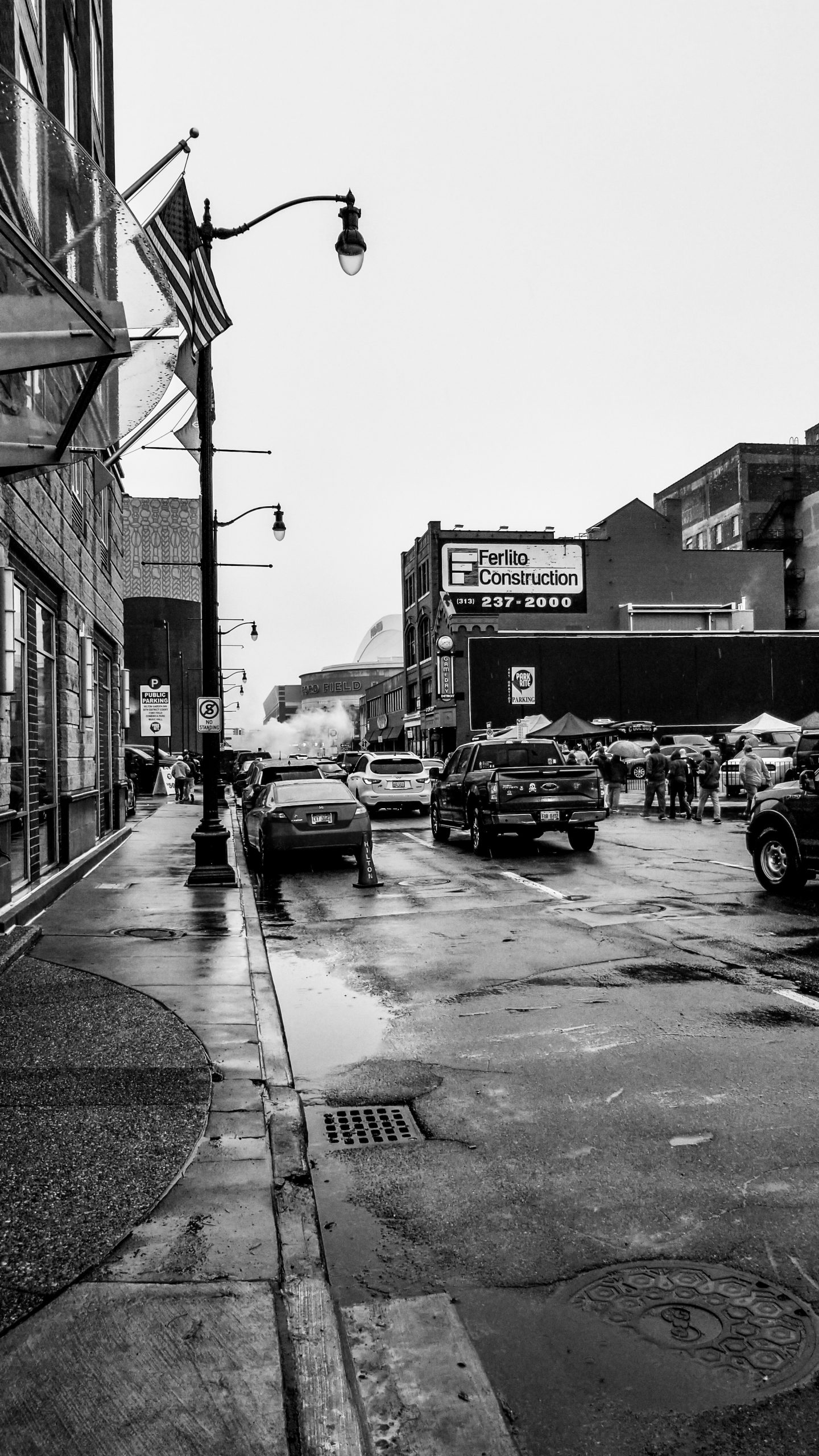 Look, man, there’s no way to sugarcoat it.  Detroit is known for being a violent, unsafe city. When looking up hotels, I did do location research, too, to see what the crime vibe was like. I’m not trying to perpetuate any stereotypes. I’m just saying, in my case, a van with Canadian license plates, not in Canada, just screams tourist. This can be a petty criminal’s dream in any city with unreputable areas. It’s a good idea to be cognisant of these areas.

stop! in the name of the love of sightseeing!

When driving through, and walking around, downtown Detroit, the efforts to revitalize this neighbourhood were noticeable. Contemporary looking buildings are numerous, and beautiful artwork dots the streets.  While the weather was too rainy for them on our visit, the Detroit Riverfront  and Campus Meritus Park looked like fun places to take the family for some outdoor quality time.  There were many theatres and concert venues downtown, too, which I guess is to be expected from a city with a rich music history like Motown. 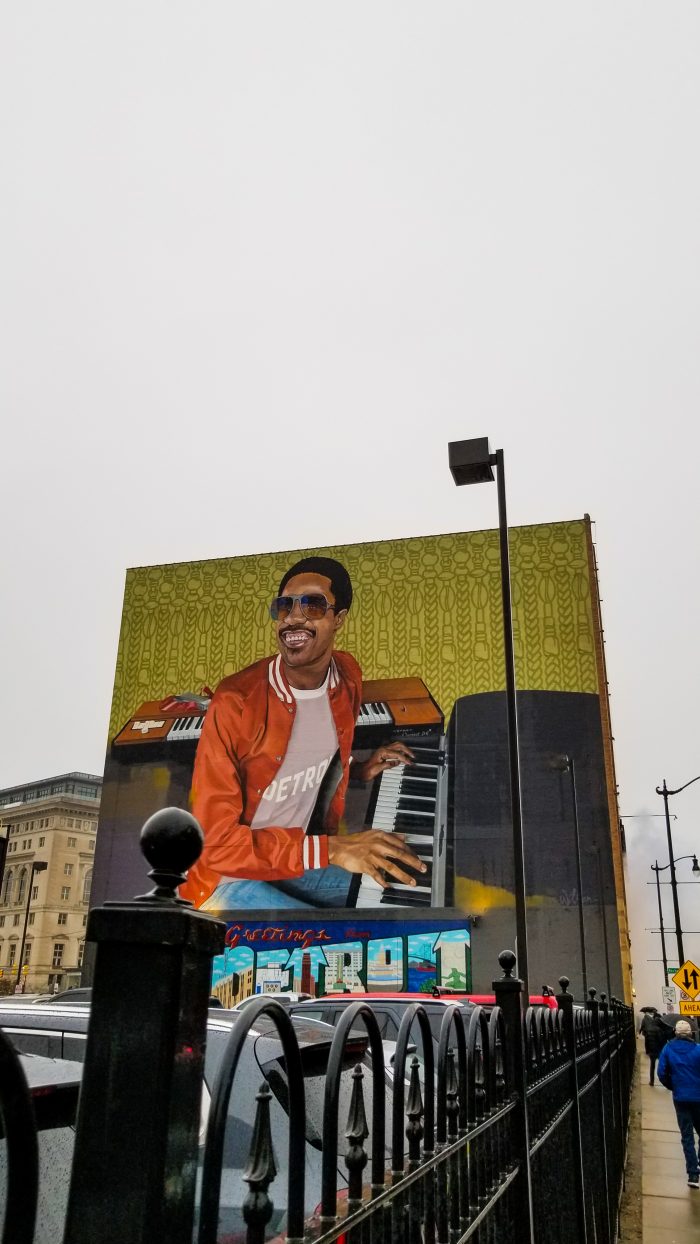 Once you start to venture outside of downtown, things in the city start to look more….gritty, for lack of a better term. Some of the more popular tourist spots are sprinkled all over the town, which allows you to see the grittiness up close.  If you only have 24 hours in Detroit, hitting up at least one of the tourist attractions really is a must, though.

For example, music lovers will appreciate a trip to Hitsville, USA, to check out the Motown Museum.  For hardcore and casual art enthusiasts,  the Detroit Institute Of the Arts and its huge collection is what’s up.   In our case, my friends at Visit Detroit hooked us up with complimentary tickets to The Henry Ford, so we had the pleasure of checking that place out.

The Henry Ford is the brainchild of, you guessed it, Henry Ford. It’s located in Dearborn, Michigan and is a huge indoor/outdoor museum complex, with the overriding theme of it being a tribute to Americana. The campus is home to the Henry Ford Museum Of Innovation, Greenfield Village, the Ford Rouge Factory and a giant 4K screen. We focused our attention on the artifacts, exhibits and memorabilia of the Henry Ford Museum. There were lots of hands on activities, and things to climb on/in, which was great, in term of keeping B, J and KJ engaged. The amount of cool, eye-opening stuff to be seen was impressive.

I do wish that we explored Greenfield Village (which features, among many highlights, one of Thomas Edison’s lab), but weather and timing did not permit this. Regardless, The Henry Ford was awesome. Just be sure to budget a fair chunk of your 24 hours in Detroit there accordingly, if you go. 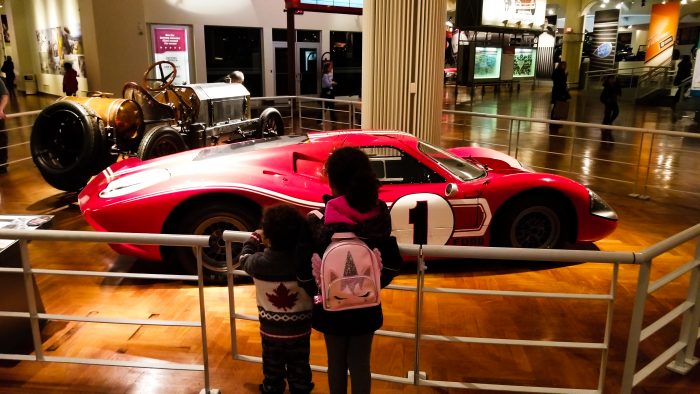 One other comment. On the way back to Canada, my kids really got a kick out of the Detroit-Windsor Tunnel. The whole ‘being underwater to cross the border’ aspect was pretty neat (though not recommended for any claustrophobes).

If you’re like me,  your knowledge of Detroit cuisine consists of Little Caesars Pizza and Eminen’s mom’s spaghetti.  You probably aren’t like me, however. Anyhoo, Detroit’s food scene is quite dynamic. On the one hand, the rejuvenated downtown core is littered with trendy, hip restaurants. On the other hand, Motor City is still a blue collar town, and the dining options tend to reflect this.

One thing that my family and I were confused about  was why there were so many Coney Island restaurants, as we had never heard of them before. Turns out that these are a  Detroit staple, and the Coney dog is one of the city’s signature foods. Detroiters love these pseudo-gourmet hot dogs the same way that my fellow Hamiltonians love Tim Horton’s coffee, apparently.   Alas, I was not able to convince my family to indulge in one of these Detroit delicacies, as tasty as the sounded.

you heard it through the grapevine

When it comes to visiting Motown,  the city isn’t nearly as bad as its reputation.  Not once did I feel like myself or my family where in any imminent danger during our 24 hours in Detroit.  Just take the usual precautions that you would, when going to any major city, and you should be alright.  I got the impression that it is slowly improving, one neighbourhood at a time. It’s truly a proud, unique place, and while living there may be a different story, I enjoyed our brief time in town.